Appropriately enough for a Sunday, we got a little lie-in this morning.We left St. Louis at about 8am, bound for Miami, OK. first stop of the morning was in Rolla, MO, where, curiously, the town had erected a half-size ‘replica’ of Stonehenge … ‘as it would have looked, complete’.The whole thing was a bit surreal.It wasn’t entirely clear why it was there at all.The text on the plaque appeared to be an explanation of ancient Egyptian water-sculpting techniques! 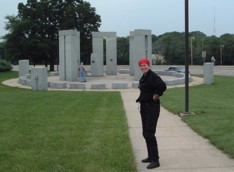 We followed a lot of the original Route 66 road through Missouri, including Devils Elbow, a unusually twisty section of road: fun for modern day motorcycles, but hell for your average Model T. In its day, this part of the road claimed many lives.

We crossed a corner of Kansas, where we stopped at Rainbow Bridge, Riverton (another historic Route 66 river-crossing), for ‘a Kodak moment’, before entering Oklahoma. 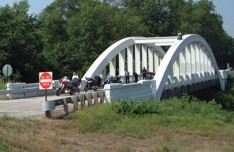 We stopped for the night at a Super 8 motel in Miami, OK: heart of America’s ‘Bible Belt’.Thanks to Brian Husbands (who thoughtfully provided a couple of cases of chilled beer on our arrival), the significance of this was lost on most of the riders until dinner time.

We dined at the Best Western restaurant across the road from our motel. There was no alcohol on sale, due to it being Sunday, and the arrival of the Rally had, by all accounts, caught the restaurant rather on the hop. An embarrassed waiter was reduced to listing the menu items that were still available, rather than those that were ‘off’!

As it was Brigid’s first visit to the States, Theo Meester suggested the oddly-named Chicken-Fried Steak (which was exactly what it claimed to be – beef steak in breadcrumbs, with white sauce), and iced-tea. (Curiously, Chicken-Fried Steak usually appears under the ‘chicken and fish’ section of restaurant menus.) The ‘steak’ was edible, if not very exciting, but the iced-tea got the thumbs-down from both of us (again, exactly what it claims to be, cold tea) – a shame, since it seems very popular everywhere here. (Cold tea in itself seems a bad enough idea. What makes iced-tea even less appealing is that it often appears to have been ‘stewing’ for some considerable time in a ribbed plastic jug reminiscent of school dinners.) Thanks, but we’ll stick with the root beer.