Today was the first of the 5.15am starts! Because of the increasing wind, we swapped bikes today. The reasoning was that John (being taller in the body) would be better protected by the windshield on the BMW, as the seating position is lower. Brigid, on the other hand, is shorter in the body, and had no problem with the positioning of the windshield on the Triumph. Notable stops today included an old jail house in Texola, TX. Everyone was very keen to lock everyone else up in the tiny cell and take photos. Pat said that one of the riders last year looked so uncomfortable behind bars that it must have seemed “way too familiar”!

We stopped for a very quick coffee at the Art Deco U-Drop Inn, Shamrock, TX. Unfortunately, it was still so early in the morning that the Inn itself was closed, and the only coffee to be had was a polystyrene beaker from a café across the road.

We missed the Devil’s Rope Museum, McLean, TX, which was indicated on our itinerary (as it was closed – again due to the time), but stopped at the restored Phillips 66 gas station for photos.

We stopped at Groom, TX, to take in ‘largest cross in the Western Hemisphere’ (well what would you expect in Texas!). To be fair, at 180ft and surrounded by the stations of the cross depicted in life-size bronze, it really was quite awe-inspiring. Alas, one of the many photos that would be impossible to take – other than from a light aircraft.

On then, for a late breakfast (brunch) at the Big Texan, Amarillo, TX. This restaurant boasts a FREE 72oz steak dinner … to anyone who can consume it within 60 minutes! In order to qualify for the free dinner, you pay a $54 deposit. You are then seated on a small stage, and presented with a full meal including the 72oz steak (cooked to your liking), salad, baked potato, coleslaw, shrimp cocktail, and bread roll. Only if you can plough your way through the whole meal, do you get your money back. 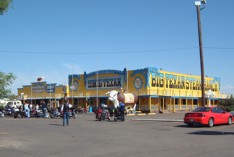 Sam Borland, a man who clearly enjoys his food, took the challenge, but failed – having consumed some 57.5oz of steak, and all of the accompaniments. A brave effort, but he didn’t touch another steak for the rest of the trip! We had a modest 5oz steak with cowboy beans, and a chocolate malt.

By the time we left the Big Texan, a number of the other riders had already gone ahead. The next scheduled stop was ‘The Cadillac Ranch’.

We were not particularly interested in looking at 7 or 8 heavily graffitied Cadillacs planted nose-down in the ground, so were pleased to see Dirk, Theo, Joe, Hugh, Roger, Rick, and Ed and Karen, just leaving. We did a quick U-turn in the road, and managed to catch them up as they joined the Interstate.

At the Mid-Point Café in Adrian, TX (the mid-point of Route 66, equi-distant between Chicago and LA) we caught up with another breakaway group of riders, and took some more photos.

Having re-joined the Interstate, the wind really caught up with us. Gusting side winds of 40-50mph hit the party quite unexpectedly, and for several miles we all battled to stay on the road. 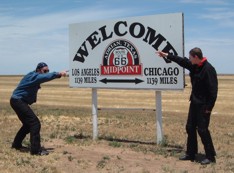 The only (brief) respites coming from passing trucks, which provided a welcome windbreak every now and again. John, in particular, now regretted his choice of the lighter bike, as he was blown time and time again onto the hard shoulder of the Interstate. The truckers, seeing our difficulties, slowed down as they approached so that they didn’t aggravate the problem.

At Tucumcari, NM, we left the Interstate to visit the Route 66 monument. (A seriously weird work of art, apparently modelled on a vast Studebaker wing.) As we left the parking lot, there was a misunderstanding. Whilst most of the group turned left, Joe and Theo turned right to rejoin the Interstate where we had left it … and that was the last we saw of them until we reached the motel.

After our hair-raising experience on the Interstate, we decided it was time to equip ourselves with proper CB radios instead of the two-way FRS radios that we had used up until now. 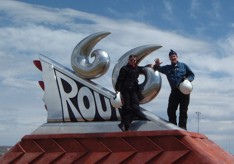