In fact, the only sports bikes on the Rally were ours. We left the Fairfield Inn at about 5.15am – just before dawn – make for the start of Route 66 on Michigan Avenue, Chicago “…
before rush hour”. We soon discovered one of the first truths that would endure for much of
our trip. Sometimes the best photos are the ones that you just can’t take.

It is very difficult to put across in words the feelings generated by the sight of 50 or so motorcycles (chrome gleaming), riding in near perfect formation, as far as the eye could see, silhouetted against the Chicago skyline in the pink and orange hues of the early morning sunrise. 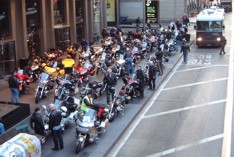 Once in Chicago, we were all allowed a few minutes to get our pictures before getting on the road. All the riders took turns offering to take photos with other people’s camera so that everyone ended up with a photo posed beneath the historic ‘Start Route 66’ road sign.Then Pat Evans, the ‘Rallymaster’, donned his yellow helmet and the Rally was officially on the way. 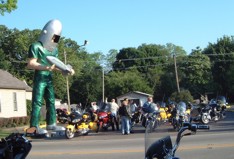 This brings me to the second truth of the trip (at least where the Rally was concerned). Never take your eyes off Pat. Woe betide anyone who is not ready to move once that yellow helmet goes on!

The scheduled stops at the Launching Pad Drive Inn (home of the ‘Gemini Giant’), Wilmington, IL (for fuel), and Funks Grove (for maple ‘sirup’?!) gave us all an opportunity to chat to the other riders. We tried corn dogs for lunch at the Cosy Dog Drive Inn (Springfield, IL), and Brigid developed a taste for root beer. 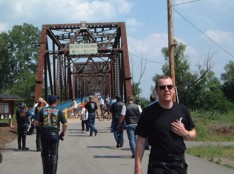 Outside St. Louis, the Rally took a side trip off I-270 to look at the old ‘Chain of Rocks’ bridge, which used to carry Route 66 across the Mississippi River.The bridge is now maintained in part by private donors whose names appear on small plaques on the central span of the bridge. (Brigid cynically suggested that the plaques bore the names of those who had jumped …)

To us northern Europeans, the weather was already becoming uncomfortably warm, so once installed at the Red Roof Inn (St. Louis, MO), we set off in search of a couple of lighter jackets. Seeing the general American disregard for ‘safety clothing’, John was worryingly keen to shed his crash helmet. Along with the two denim jackets, we bought a few bandanas (large handkerchiefs to fellow Brits – only unlike the cartoon British holidaymaker, the American version is tied at the back of the head – not knotted at each corner!). We refrained from going totally native, however, choosing to wear our jackets and helmets during the long daytime rides, shedding them only for short evening trips.The bandanas soon proved their worth, as they could be soaked in iced water (thanks to Ed and Karen York whose trailer was equipped with an icebox) to provide much needed relief from the heat of the midday sun.