By now, a growing number of riders had decided that we were seeing a little too much of the Interstates, and not enough of Route 66, although much of the original road still existed, and was often a quieter and more enjoyable ride.The two Canadians, Theo Meester and Dirk De Jong, persuaded us that it would be worthwhile leaving at 7am to ride some of the older roads. (This must be a first … John persuaded to leave earlier than he has to in the morning!) 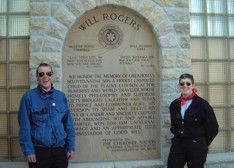 On the plane, Brigid had noticed that a lot of Route 66 landmarks seemed to be dedicated to a certain ‘Will Rogers’. Neither of us had any idea who Will Rogers was. Now was our chance to find out. We stopped at Claremont, OK, at the Will Rogers Memorial Museum.

Will Rogers, a quarter-blood Cherokee, turned out to be a big film star from the silent era, and also a celebrated home-spun philosopher, satirist, writer, and pioneer aviator. When he died in 1935 in an experimental aircraft, moments after takeoff, the world
mourned. 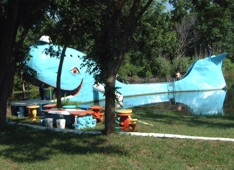 In Catoosa, OK, we stopped briefly to see the Blue Whale.This strange fibreglass creation was once a successful water park in the early days of Route 66.The attraction was rather lost on us, as it has been neglected for many years, and the ‘water’ is now just a stagnating pond.

We ate lunch in the Rock Café (in existence years before the Hard Rock Café), in Stroud, OK. Like many of the traders along Route 66, the Café has seen some lean times in recent years. But now, thanks to a resurgence of interest in Route 66, business is booming again.The Café is quite small, so when Pat and the rest of the Rally caught up with us, we moved on.

Because we were keen to stick to the old Route, we missed the Cowboy Hall of Fame, but we did stop at the Round Barn in Arcadia, OK, the significance of which (we are ashamed to say) was lost on us, as it was closed. We by-passed Oklahoma City, as there were demonstrations surrounding the execution of Timothy McVeigh (the Oklahoma City bomber).

We stopped at the Best Western motel in Clinton, OK, for the night. One of the other attractions we accidentally missed, was the Route 66 museum across the street from the motel.The literature indicated that the museum closed at 6pm. As we arrived at 5.55pm, we decided it was already too late to visit. It was only later that we discovered that it had been open until 7pm!