We had made the decision to try to reach Chicago by Thursday night – leaving ourselves a full day to explore the City before meeting up with the rest of the Mother Road Rally participants on Friday evening. Our mileage chart indicated that the shortest route would be 546 miles – a pretty marathon day’s run, by anyone’s standards.  However, a quick inspection of the map suggested that using the Canadian route would shave a good few miles off the journey. This fitted well with our plan to see Niagara Falls en route.

Much has been said about the Niagara Falls, but as with all spectacular attractions, we thought that the descriptions were probably exaggerated. The plethora of tourist traps (all claiming to be the one and only ‘official’ authority) on the road did nothing to change this opinion. 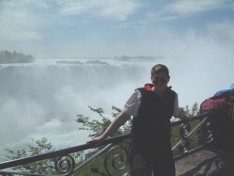 We could not have been more wrong. For a couple of miles, as we approached, a cloud of white mist, thrown up be the Falls, was clearly visible. Despite the sun, the air was pleasantly cool and damp. On the Canadian side, the commercialism was vastly reduced, and the full magnificence of the Falls could be truly appreciated. As Londoners, we were amused to find red double-deckers in use as tour buses – complete with original route numbers! 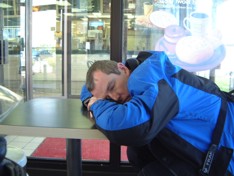 After an hour or so, we headed out of town on the QEW, bound for Windsor (Detroit). We stopped for gas and lunch at a service station in Dundas, Ontario, moving on as quickly as we could. Within about 30 minutes, John signalled that he wanted to pull off the 401. The mileage of the last few days had taken its toll, and he desperately needed to rest. We stopped at the next motorway service station, and John dozed with his head resting on folded arms at a restaurant table.

Within minutes, John was woken by the sound of a British voice enquiring about the Triumph parked outside. The owner of the voice turned out to be an ex-pat, until recently working in Kentucky, and a big fan of Triumph motorcycles. He was in the process of moving back to Canada, but kindly invited us to look him up if we were passing Kentucky, and perhaps ride with him in the Smokey Mountains.

Wherever we go, both bikes generate interest from fellow bikers of all ages, but the Triumph particularly seems to spark enthusiastic appreciation.

We crossed the US border at about 4pm. Realising we were unlikely to make Chicago, we decided to stop at Kalamazoo (as in “I got a gal in …”) for the night, leaving us a short hop of 140 miles to our destination.